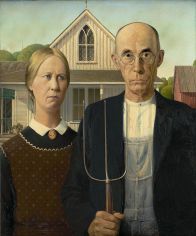 In his maiden speech to the House of Commons on 29 January, Danny Kruger, the newly elected Conservative MP for Devizes, extolled the virtues of tradition, Christianity, patriotism and strong local roots.

‘Brexit is about more than global Britain,’ he argued. ‘It is a response to the call of home. It reflects people’s attachment to the places that are theirs… The main actor in our story is not the solitary individual seeking to maximise personal advantage… [it] is the local community.’

With its lyrical evocation of his Wiltshire constituency’s ‘big skies and tough people’, the speech has been hailed as heralding a new ‘post-liberal’ politics. But when he goes on to say that ‘We are children of God, fallen but redeemed,’ it sounds not so much post-anything as pre-modern. There’s nothing new about the rhetoric of blood and soil, either: it is just what Viktor Orbán and Jarosław Kaczyński have advocated in Hungary and Poland – not to mention a few other politicians in the first half of the 20th century.

Nor is the reaction against modern liberal values, and nostalgia for the sense of security afforded by old-fashioned communities, new in British politics. Communitarianism is an idea that first gained traction in the 1990s in response to the effects of economic neoliberalism. Since then, the idea has been co-opted by politicians of all shades. David Cameron was once taken with the ‘red Tory’ ideas of Phillip Blond, while Jeremy Corbyn’s election defeat last December, and the attendant loss of the party’s northern heartlands, has given new impetus to the ‘Blue Labour’ faction championed by Frank Field, David Goodheart and Stephen Kinnock.

In a post on Unherd last year, the clergyman and columnist Giles Fraser argued that social mobility was the enemy of social cohesion and the family itself; people should stay in their home towns to take care of their elderly parents rather than expecting the state to do it.

The New Statesman, meanwhile, found a poster boy in the French urban geographer and social commentator Christophe Guilluy.  Sympathetic to the gilets jaunes and to Brexit, Guilluy makes some valid points about growing economic inequality and the way people on ordinary salaries are being priced out of the city centres, but there is a chilling undercurrent to his ideas which, though he writes from a left perspective, has found favour with Marine Le Pen’s Rassemblement Français

Theresa May, in her notorious speech to the Conservative Party Conference in 2016, asserted that ‘If you believe you’re a citizen of the world, you’re a citizen of nowhere.’ Leaving aside the fact that this was rich coming from someone whose husband was a former fund manager for Deutsche Asset Management and that, having just done my annual accounts, I find the idea that I am part of some international elite pretty laughable, why on earth shouldn’t I feel more in common with a creative, broad-minded artist or entrepreneur from Lisbon or Ljubljana than with some wilfully ignorant old bigot who happens to have been born down the road from me? Freedom of association – to choose the people with whom you wish to make common cause – is protected by Article 11 of the Human Rights Act.

Traditional communities are invariably viewed through a lens of sepia-tinted nostalgia: ‘You used to be able to leave your door open round here,’ ‘A neighbour would always pop round to see if you were all right…’ ‘Robbed of their most go-ahead young people,’ Fraser lamented, ‘working class communities become ghost towns.’ What he omitted to mention is that there is a push factor away from such communities, as well as a pull factor towards the cities, which forces anyone with any get-up-and-go to… well, get up and go. As Lou Reed and John Cale put it in Songs for Drella, their elegy for Andy Warhol, ‘There’s only one good thing about a small town, You know that you want to get out.’

Close-knit communities, where everyone knows your business and thinks they know your place, can be oppressive, an impenetrable fortress against those outside and a prison for those within. They preserve themselves by the exclusion of others – those who look different, act differently, and think differently. They enforce social conformity and punish those who step outside their norms through stigma, ostracism and abuse, stifling enterprise, creativity and social mobility. Try being LGBT or an unmarried mother in one of these warm-hearted, neighbourly societies. Immigrants are seen as a threat, and Jews will never really belong. No wonder that since the Second World War young people have fled these communities in huge numbers, not just to seek work or to go to university, but simply to be themselves, free of wagging fingers and twitching curtains.

Freedom of the City

How many people, having moved to the big city to escape the censorious tongues of the Ena Sharples of this world, actually live in a state of alienation and anomie, as if there were no moral values? In my experience the great majority are as concerned and caring as their forebears – if not more so. But their values, and the objects of their concern, have evolved. They care less about people’s ethnicity or sexual orientation and more about whether someone is unhappy or in need. This is as is should be, and our world is the better for it.

Of course we all need communities of some sort, but I would argue that we need more open, tolerant, flexible and inclusive communities. Such communities may be local, but they may also transcend locality, based on a shared interest, workplace, voluntary association or leisure activity. Those who – bewildered and threatened by the complex choices of the modern world – wish to force us back into foetid, claustrophobic small-town lives are choosing passivity over progress, comfort over courage, fear over hope.

Do we seriously want to go back to the world of Angela’s Ashes, to huddle together in the frowsty warmth of the extended family, with its rancid stew of frustrations and resentments bubbling away for generations? Do we want to go back to a world of curtain-twitching, suspicion and malice, where decent, ordinary men lived in fear of blackmail, imprisonment and ruin because of their sexual orientation, where healthy women were locked up in mental hospitals for having children outside marriage? Where’s the humanity and compassion in that?

So, two cheers for heartless Western individualism. Of course the modern city can be a lonely place, and our competitive society can be unforgiving to those who fail. People’s lives are still too much determined by their background. But that is not because we have gone too far in our pursuit of individualism and social mobility. It is because we have not gone far enough.

What our ‘lonely’, ‘alienated’, ‘atomised’ society offers – as no other has done – is the opportunity for people to escape the stultifying expectations of their families and communities, to use their talents to the full and to forge their own destinies. It’s called progress, and we should never, ever apologise for or be ashamed of it.