The Covid-19 pandemic has been a disaster – but will it also be a lost opportunity?

In the early weeks of the Covid-19 pandemic, there was much talk that the necessary precautions would encourage us to rethink how we conduct our lives, and what we really value. Traffic noise subsided, birdsong rang out in cities, wild animals roamed town centres, and ecosystems began to heal. Aircraft noise all but disappeared, the sky was no longer criss-crossed with con trails, and air pollution was significantly reduced. Having learned that meetings and conferences can take place online, we would travel less. We would walk or cycle to work. We would value nature more.

A hundred days on and 55,000 dead, the soul-searching, the solidarity, the ‘Blitz Spirit’ and the applauding of health workers have crumbled. Politicians bluff and bluster, the streets are as busy with traffic as ever, while large swaths of the public behave like toddlers throwing a tantrum because Mummy and Daddy won’t let them play outside, crowding into parks and on to beaches, strewing them with litter and defecating into Styrofoam takeaway boxes.

It’s beyond my understanding. I’ve been no further than the local shop in three months, and do you know what? It’s perfectly OK. ‘All of humanity’s problems,’ wrote Blaise Pascal in the 17th century, ‘stem from man’s inability to sit quietly in a room alone.’ Sadly, it seems that many people lack the patience, the imagination or the inner resources to heed his advice.

Last week, Boris Johnson told the House of Commons that ‘our long national hibernation is beginning to come to an end’, despite the reservations of the government’s own medical advisors. In the interests of reviving the economy, ‘non-essential’ shops and pubs will reopen and restrictions on holidays abroad will be eased – if you can find anywhere willing to admit a horde of drunk, disorderly and potentially disease-ridden Brits. This week Johnson announced his ‘New Deal’ under the slogan ‘Build, build, build’. Aside from the fact that the sum available was widely criticised as inadequate, it was typical, pre-Covid hard-hat thinking, promising to relax planning laws with a jibe at ‘newt-counting delays’.

While the construction and airline industries are considered too important to fail, arts organisations are forced to make sweeping redundancies, with some facing closure. Last week Sir Simon Rattle, conductor of the London Symphony Orchestra, the violinist Nicola Benedetti, the trumpeter Alison Balsom and the cellist Sheku Kanneh-Mason had an online meeting with the Culture Secretary Oliver Dowden to discuss the perilous situation of the UK’s orchestras. These world-renowned musicians got just 40 minutes – does the DCMS budget not run to a professional Zoom subscription? – and received little in the way of reassurance.

The arts contributed £10.8 billion a year to the UK economy, and £2.8 billion to the Treasury through taxation last year, though our government clearly considers the sector even more ‘non-essential’ than, say, scented candles. But then philistinism is deep-rooted in the British public, and Johnson is adept at playing to the gallery.

Meanwhile, the Arctic is on fire, scientists have warned that UK temperatures could reach 40C regularly by end of the century, and a report by the Institute for Public Policy Research (IPPR) has concluded that a historic disregard for the destruction of nature has left Britain ‘acutely vulnerable’ to its effects and entirely unready to meet the challenge.

Of course we need to save jobs, but in the longer term we need to think hard about what sort of jobs we should be creating. Last autumn, New Zealand’s prime minister Jacinda Ardern challenged the tendency to measure success by economic growth and GDP. ‘Economic growth accompanied by worsening social outcomes is not success,’ she told the Bill & Melinda Gates Foundation. ‘It is failure.’

We need to find a better way of ensuring the health of the economy than persuading us to go on buying more and more stuff we don’t actually need, and taking three or four foreign holidays a year.

The Covid-19 crisis has been described as a huge opportunity to rethink the way we organise society. But on the present evidence, I fear it will be a missed opportunity. The best I can manage is Gramsci’s ‘pessimism of the intellect, optimism of the will’.

But when the so-called developed world really begins to feel the effects of climate change, Covid-19 will look like, well, a walk in the park.

I’ve been without a car now for more than a year. After I discovered that the new catalytic converter needed to make my ageing Chrysler PT Cruiser roadworthy again would cost more than the vehicle was worth, I decided it was time the old charger was put out to grass. I’m glad it went to a good home – a nice chap from Wanstead who converts them into customised off-road rally cars – rather than a breaker’s yard.

I thought about getting a replacement, but as the weeks turned to months, I realised I was managing perfectly well without one. I had rarely driven into central London, as parking – if you can find a place – is prohibitively expensive, and as of 8 April, my car would have been subject to the new emissions levy, in addition to the congestion charge.

Most of my car journeys were short local runs that I could have made on foot or by public transport. And if I need a motor for a weekend jaunt, I can rent one for less that it used to cost me to park outside our house for a year.

Of course I miss the car occasionally, especially waiting for a bus on a cold, rainy night. The sense of movement within a space that’s your own, the power of the 2-litre engine, the lights glowing on the dashboard, the radio, the comfortable seat with the armrest down…

But there are compensating benefits. You can’t read while driving, as you can on public transport. Walking, or travelling by bus, you notice things you wouldn’t from behind the wheel; snatches of conversation, street markets, curious architectural details, ghost advertisements fading on walls, small signs of the changing seasons…

And then there is the financial saving: insurance, road tax, MOT, servicing, repairs, AA membership, petrol and parking permits added up to something in the region of £2000 a year. That was a significant burden lifted.

Nor could I ignore the environmental impact of driving: the carbon emissions, the air pollution, the contamination of soil and groundwater by fuel and particulates, the flooding caused by people paving over front gardens to create off-street parking, and the hideous mess that traffic congestion has made of our towns.

To escape from the computer, get some exercise in the open air, and do something to help the environment, I volunteer once a week at a local nature reserve. I could hardly be unaware of the irony of driving the 4km there and back.

Now I get the train. It’s just two stops, and takes only five minutes, followed by a pleasant 1km walk through the woods from the station to the containers where the volunteers meet, so I’m getting some exercise before I even start work.

Of course, it is easy to manage without a car if you live in a major city with decent public transport. A fascinating map posted on Twitter by David Ottewell, head of data journalism at Reach, shows the proportion of commuters across the UK who drive to work compared to those who walk, cycle or use public transport. It’s very revealing: outside the big cities, most people drive.

They don’t really have much choice. Public transport in rural areas, and on the margins of our smaller towns and cities, is sparse, infrequent and unreliable. If we want to persuade people to be less dependent on cars, we need to provide viable alternatives.

Recently, a charming little book I bought online arrived in the post. Illustrated with delightful engravings, W. Aldridge’s A Gossip on the Wild Birds of Norwood and Crystal Palace District (1885) was a collection of articles that had originally appeared in the Norwood Review. Inside the front cover is the bookplate of Camberwell Public Libraries Reference Section, and the title page bears the inscription ‘With Author’s Compts’. No doubt what are left of our public libraries have little use for such Victorian curios, but I was glad to repatriate the book to its south London birthplace.

A little research unearthed the facts that Aldridge was a cabinet-maker and upholsterer with premises on Westow Street, and keen amateur ornithologist; he judged the stuffed bird category at the Crystal Palace Bird Show in 1887. His book reveals this Norwood tradesman to have been a keen pipe-smoker, angler, painter and amateur taxidermist, well travelled – he had visited Paris, Holland, Switzerland, Norway and Prussia – well read, and a believer in a benign Creator; he quotes approvingly Izaak Walton’s remark on birdsong:

‘Lord, what psalmody hast Thou provided for Thy saints in heaven when Thou affordest bad men such music on earth?’

In all, he listed 51 species of birds, which he considered ‘a very respectable quantity for a suburb of London within a few miles of St. Paul’s’. The only raptors he reported were the ‘much persecuted’ kestrels, occasionally sighted hovering on the air currents between Westow Street and Beulah Spa, and on South Norwood Hill. One evening, smoking his pipe in a friend’s garden on Belvedere Road, he saw a barn owl glide silently over the ground.

He also reported rooks and jackdaws in the taller trees from Dulwich to Beulah Spa; green woodpecker in Sydenham Hill Wood; nightingales nesting in Sydenham Woods and at Elmer’s End; cuckoos, goldfinch and bullfinch in Grange Wood; redwing and fieldfare in winter between Central Hill and Beulah Spa; and skylarks in the open fields that still existed on either side of Wells Road between Sydenham Hill and Sydenham town.

‘The oldest inhabitant,’ he reported, recalled that thirty years previously there was ‘a small Heronry in the old Norwood woods’, the nests ‘as large as bushes, at the tops of trees’.

By August 1887, when Aldridge wrote to the London Standard to report the rare sight of a cormorant perched on the steeple of the Wesleyan chapel at Upper Norwood, his tally of birds had increased to 56 – though sadly I can find no record of the four intervening species.

Aldridge took a melancholy view of the future of bird life in the area. ‘In a few (very few) years,’ he wrote, ‘when, by the increase of population, Norwood will be a part of London, undivided by fields and hedges, most of the birds will have retired beyond our district, and be as extinct in Norwood as the Ichthyosaurus and Plesiosaurus – nay, more so, for these monsters, or, rather, their restored figures may still remain in the [Crystal] Palace grounds…’ 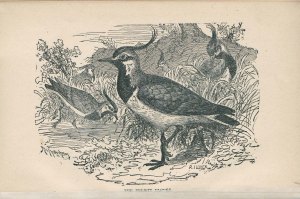 He was perhaps too pessimistic, underestimating the capacity of many species to adapt to urban conditions. While it is true that nightingales and skylarks have long since disappeared from the suburbs of southeast London, the swifts and swallows, thrushes, finches and tits have held out, while other species, absent in his day, have reappeared. In addition to kestrels, buzzards, sparrowhawks and hobbies patrol the skies over Sydenham Hill Wood; magpies, made scarce in Victorian times by persecution from gamekeepers, staged a recovery in the 1970s and are now ubiquitous; the green woodpecker has been joined by the great and – more rarely – lesser spotted varieties; and goldcrest and firecrest, absent from his list, are now frequent winter visitors.